If you have ever seen a power hammer in use in person - and you like forging - you often fall into one or two categories within the first 10 seconds;

A power hammer is at the "business" end of blacksmithing, when you have a need to either work large stock, or do more jobs in the same amount of time. For instance being more efficient when forging out blades, making damascus steel, or doing batch work where hand hammering might be too slow to be profitable.

The ST Power hammers are air hammers, meaning they run on electricity to compress air in a cylinder that is used to drive the hammer down. Using a foot pedal you control how hard it will hit; the harder you press down on the pedal, the harder the hammer will hit.

Many power hammers in China are based on the classic Russian STANKO model, having been developed in the Soviet Union and then advanced over many years by several different companies as technology upgrades in materials and processing machinery evolved.

The ST Power hammers are made by a Chinese brand “ST Anyang Power Hammers”, originally started by former employees from a larger power hammer manufacturer callled "“Anyang FP” also based in Anyang, China. After a difficult start arguing with Anyang FP about copying their copy of the STANKO, the ST Power hammers now marketed are the Advanced series developed by ST and not the standard “Economy” model initially made.

Being a smaller manufacturer the ST Power Hammer company has been able to rapidly upgrade their model range, and today offer a series of advantages over the old model:

Here is a clip introducing the first batch of ST Power Hammers at Nordic Edge in March 2022:

Nordic Edge is the ST Power Hammer dealer for the east coast of Australia, having serviced the knifemaking and blacksmithing industry in Australia since 2015 and having built a solid reputation for high customer satisfaction. Nordic Edge is based in Brookvale on the Northern Beaches of Sydney, supplying anvils, tongs, steel, hammers and other related products for knife makers, blacksmiths and other metal workers.

Tested and upgraded in Australia

There are several brands of power hammers available in Australia, often requiring pre-ordering 3+ months in advance and with no quality control in Australia after import. Should there be any issues when the power hammer finally arrives, it can take a bit of time and effort to get the issue resolved.

What we have done is to try making this process a little easier by importing and testing each hammer before sale:

A power hammer is a powerful tool requiring training on safe use, as well as protective equipment and safe working processes. Take the time to learn how to safely use and maintain your power hammer to ensure your own safety and the long working life of the machine. Hitting cold steel, hitting something that is not supported properly on the dies or even holding tongs up or down at an angle can be enough to shoot the work piece out from the hammer, hurting the operator or property around the hammer. Great care is required whenever operating heavy machinery.

A power hammer is an industrial machine requiring maintenance to ensure a long service life, like most other machinery it should be regularly looked after. For most home users this means greasing the power hammer regularly, making sure the oiler never runs out of oil, and having it serviced or inspected should it develop any issues over time.

The hammer should be run in for 8-10 hours before heavy forging is done. About half of this is done at Nordic Edge before delivering the hammer to you. Final bedding in of all components will be at about 20 hours but from 8-10 hours the hammer can be used to full capacity.

When the hammer is used heavily it will become hot and emit some oil smoke around the ram. This is normal and will not affect the hammer.

The oiler on the ST Power hammers is an upgraded version from the classic Stanko/chinese style hammers, with sight glass for "max" and "min" oil levels, and a primer rod.

Every time you start up the power hammer, lift the primer rod (the black ball in the below photo), hold at the top for 2 seconds and pump down. Do this 5-10 times when first starting up the hammer to help start pulling oil into the hammer.

Note: The oiler adjustment is the black wheel on the left in the photo, on the steel pipe going up from the oiler. This is used to adjust how much oil goes into the hammer. 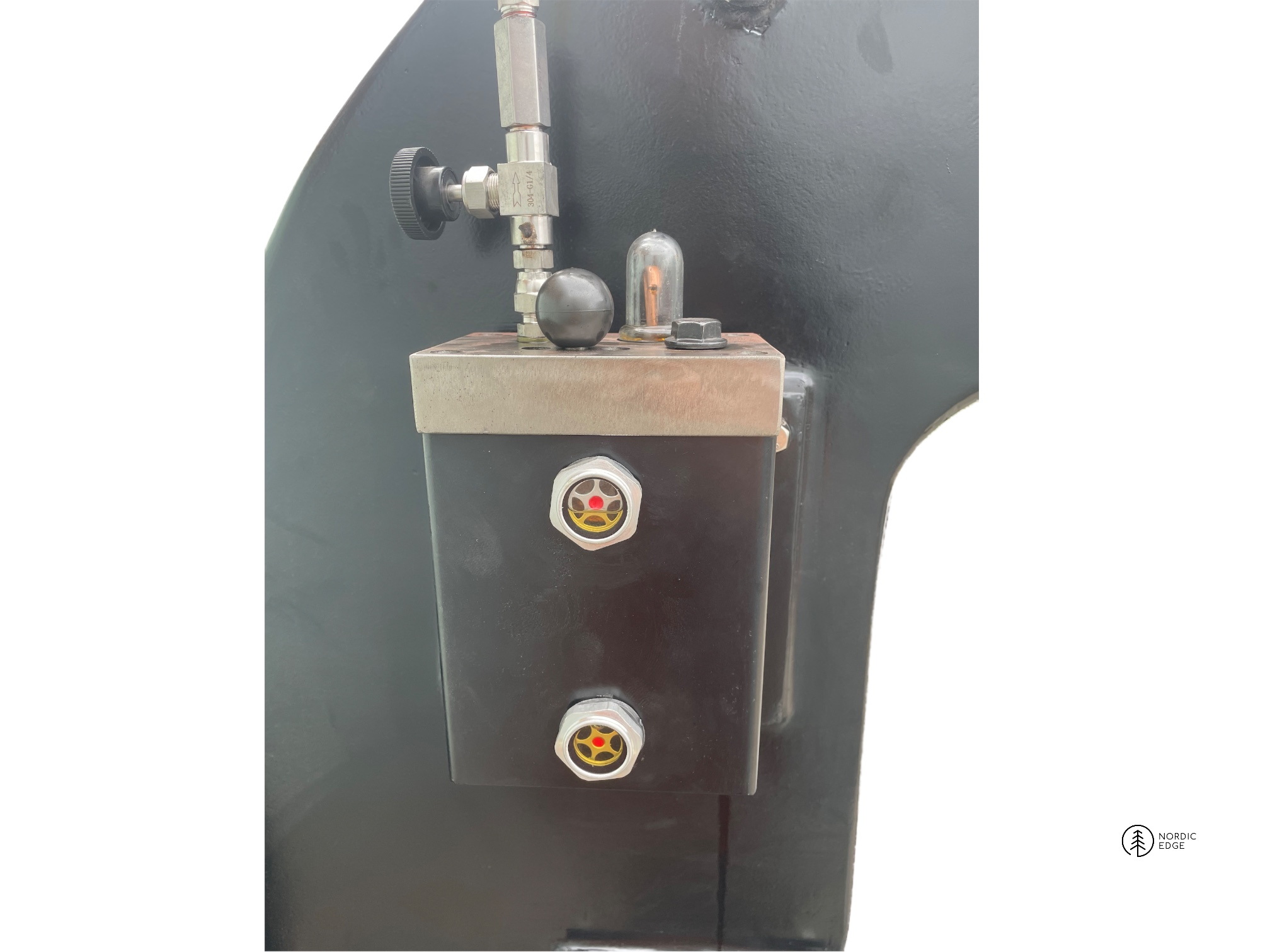 Running in period: 3-4 seconds per drop.

In the run-in period, more oil should go into the hammer, aim for one drop per 3-4 seconds in the sightglass, coming out of the copper tube inside the plastic dome on top of the oiler.

After the run-in period: 6-8 seconds per drop.

In normal use, reduce the oil going into the hammer and check this now and then during use, making sure the oil drops take about 3-4 seconds each.

Make sure the power hammer never runs out of oil, simply fill with 5W-40 motor oil back up to the top sight glass before the bottom sight glass runs dry.

What oil to use:

A power hammer has less frequency and a lower operating temperature than a car engine and can use a wide set of oils, recommended is 5W-40 or 5W-30, for temperatures below 10 C, a thinner oil is recommended like 5W-20 or even 5W-10. A synthetic motor oil from Super cheap auto or a petrol station will do the job nicely.

How often to grease the hammer depends on use rather than time, but every month or so is not a bad starting point.

There are grease nipples underneath the two panels on the left side of the hammer. Note how Nigel in the video below uses a set of tongs to get the grease gun off again without risking damaging the grease nipple or grease gun as an added precaution.

Grease nippels are easy to replace should one break over time.

The first 8-10 hours of running time, the hammer should not have any heavy forging done. Let the hammer ease into production, with light use to ensure the temperature and oil/grease distribution is completed and the pneumatic system has really gotten warm and run in.

At Nordic Edge the hammers are run for about half the run-in period as part of the quality assurance process, this also ensures that we would find any issue before packing it back up and sending it out to the customer. We don't want you getting your new hammer and then finding out there was some kind of issue with the electrical system, a seal missing or leaking etc.

Important: Do not leave hammer idling at "Return"

On the side of the power hammer is the hand level, used to switch between "Idle", "Return" and "Press".

"Idle" is what the hammer should be in when off, if leaving the hammer more than a few minutes while the steel is heating back up, as when walking away to do something else.

Leaving the hammer in "Return" mode for longer periods of time will reduce the life time of the hammer. The ram being left to hover at the top of the stroke does not let oil in to lubricate the ram, and may over heat the hammer. Best practice is to leave the hammer at "Idle" if walking away, or just turning the hammer off using the on-off switch on the side of the hammer.

In normal use a power hammer that is greased and oiled will require minimal maintenance but it will extend the life of the machine if now and then checking the plastic oil line and replacing when required, as well as paying attention to any change over time in the sound and operation of the hammer. Leaking oil is a natural part of running an oil lubricated air hammer, the oil not only lubricates but also seals parts of the mechanisms to having to replace the oil and wipe up some oil is expected.

The tap on the left side of the power hammer should be used every few months to drain out any excess oil at the bottom of the ram. Use the red handle to open the tap, holding a bucket or similar underneath.

Verifying that the bolts are tight and the keys holding the dies in are tight should be done once a month or so and takes little time before starting the hammer up.

Create a routine of checking the oiler, priming the oiler and visually inspecting the hammer at every use. Every now and then during the forging, verify enough oil is going in by counting 3-4 seconds per drop in the sight glass. If in doubt, oil too much. This cannot hurt the power hammer in any way while running dry certainly will.